With all the hard work that men put into sculpting their muscles and building their stamina, it is but natural for them to be aware of their bodies’ innate requirements. Maintaining vitality and wellness is one of the primary needs of the human body, and this need becomes even more pronounced when an individual engages in strength training and bodybuilding. This is the reason why male bodybuilders, in particular, regard testosterone among the most important components that ensure their well-being as well as maintain their energy levels. 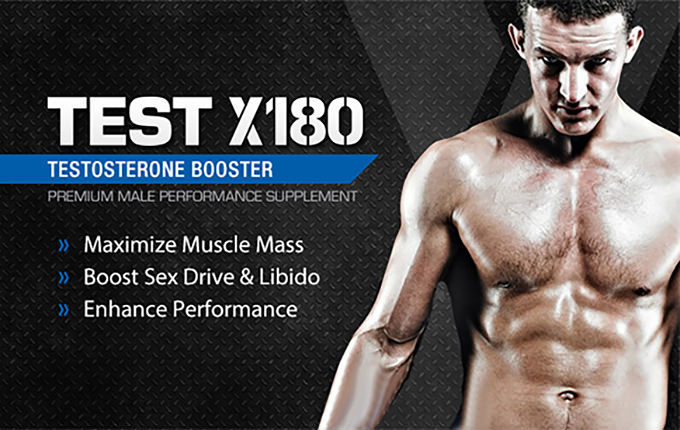 To attain their goal and sustain healthy levels of testosterone, an increasing number of bodybuilders are now choosing testosterone supplements, such as Test X180 by Force Factor.

In a nutshell, Test X180 is a formula designed to boost testosterone, without exposing the body to the effects of harsh chemicals. Produced by Force Factor, the supplement was a brainchild of former members of Harvard University’s rowing team. The formulation of Test X180 came to be as a result of these sportsmen’s firsthand knowledge about the nourishment a person with an active lifestyle needs.

The most remarkable feature of Test X180 is the fact that its creation is based on scientific research and is proven to enhance the body’s ability to function by optimizing the testosterone count.

One of the most noticeable highlights of Test X180 is that it does not work on the flawed principle of “one size fits all”. Instead, it offers three different types of testosterone boosters in order to cater to individual needs. These include: 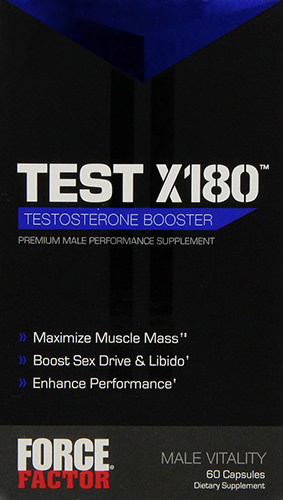 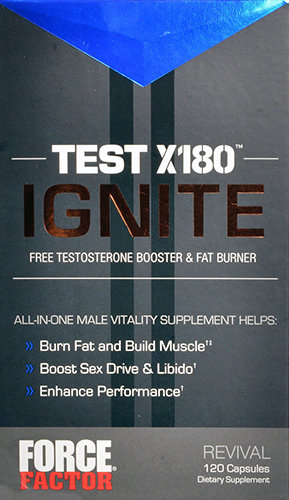 The road to gaining muscle mass can be a long one. Using the wrong kind of supplemental testosterone can not only hamper the process, but may even backfire and have negative repercussions on the user’s body. When it comes to Test X180, however, consumers can rest assured about the safety of each ingredient that goes into it. This is because every component of Test X180 has been approved only after meticulous research deemed it suitable and safe for consumption. 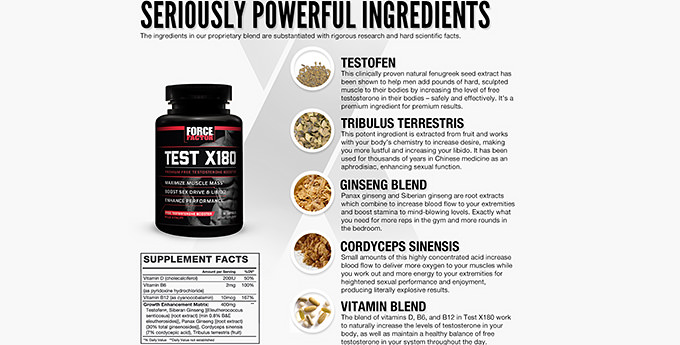 This is the ideal product for anyone who is concerned about taking artificially enhanced testosterone boosters and their possible side effects. Here is the product’s all-natural ingredient list:

Serving as the base of Test X180, Testofen is a naturally occurring substance found in fenugreek seed extract. Scientific studies have shown that Testofen enhances testosterone levels, leading to greater success in developing a chiseled body.

The ginseng mix comprises a combination of Siberian and Panax ginsengs. This mixture has traditionally been used for its stimulating and aphrodisiac properties in the traditional healing methods prevalent in Indian, Chinese, Russian and Korean cultures.

Vitamins D, B12 and B6 help energize the body and maintain its strength. Additionally, they assist the body in successfully utilizing the testosterone and ensure its proper functioning.

The use of tribulus terrestris can be dated back to ancient China. It is found in the fruit of a puncture vine plant. It is popular among athletes and bodybuilders who prefer natural forms of medication.

The natural habitat of this ingredient is on higher altitudes. It has been known to be consumed by adventure sportsmen. Historical accounts of Chinese and Tibetan societies also show its use as an aphrodisiac. 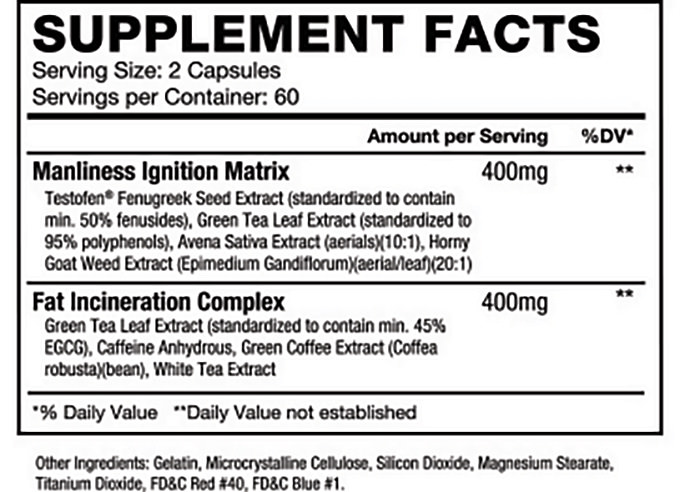 In conjunction with an individual’s regular fitness routine, the supplement acts to increase the body’s testosterone levels. Once it is consumed, the capsule: 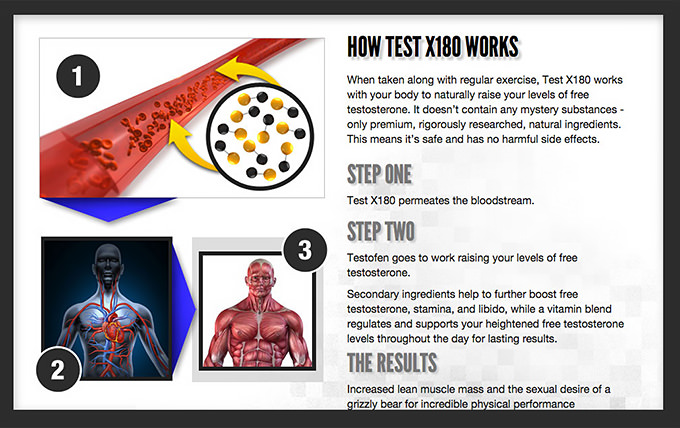 Since there are a number of testosterone boosting supplements available in the market, it is imperative to observe how Test X180 fares among them.

While Troxyphen does contain testofen and tribulus terrestris, it is devoid of the other elements that make Test X180 so potent.

Out of all the components of Test X180, High T only contains vitamin B6, while its nutrition information is unclear about the inclusion of testofen.

The only thing in common between this supplement and Test X180 is that they both contain 60 servings per bottle. 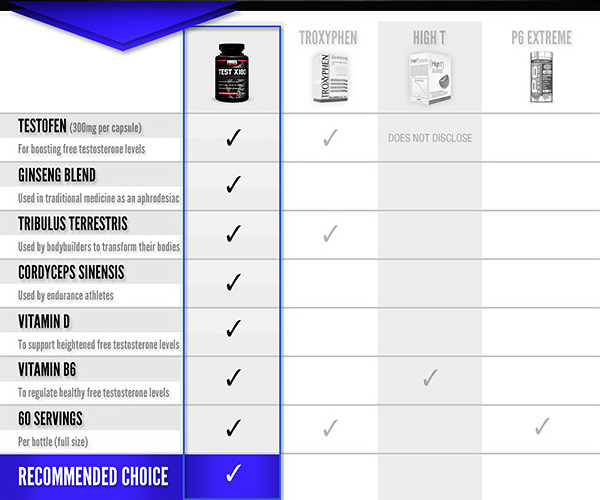 Test X180’s success can be judged by the fact that it has received the GNC Rising Star and Bodybuilding.com New Brand of the Year awards in 2009 and 2011, respectively. Its reception among its target market has also been quite warm. This is proved by the overwhelmingly positive reviews it has received from satisfied customers, whose ages range from early twenties to late fifties.

Additionally, the supplement has been featured in a number of online health magazines, such as Health Headlines and Health News Journal. 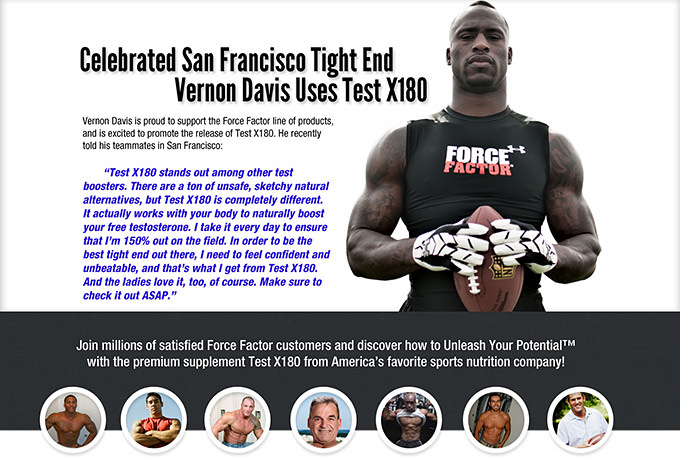 If you wish to place an order for Test X180, here are some things you need to know:

The product range is priced at:

The company offers 100% money back guarantee.

The shipping rates start at $4.99 and depend on the quantity of product ordered. It typically takes one to five business days for orders to reach. 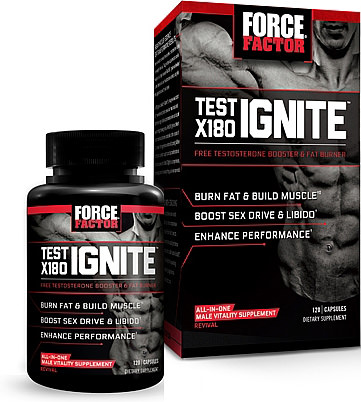 Customer support representatives for Force Factor can be reached via phone in US, Canada, UK, Australia, Guam, Puerto Rico and Virgin Islands.

Diesel Test Review – Are You Worried About Your Natural Test Levels?

Victor Boost Review – Does It Deliver What Was Promised?

Testoril by Premium Nutraceuticals Review – How Good Is This Celebrity Endorsed Testosterone Booster?